Comillas is a town in northern Spain, in the Region of Cantabria, sheltered by the Picos de Europa Mountains. It has an attractive harbour and beaches with crystal clear waters. It was birthplace of the film maker Mario Camus and the traditional holiday destination of the nobility. It also has an amazing array of modernist buildings… What more could you ask for?

The town of Comillas is an ideal destination to feel the magic of Green Spain. It has stunning natural surroundings. In winter it is sheltered by the snowy peaks of the Picos de Europa Mountains, and in summer its warm temperatures are perfect to enjoy its beaches with crystal clear waters and its harbour, surrounded by small, traditional taverns. What is more, Comillas is now one of the most prestigious destinations in northern Spain on account of its wealth of monuments. Allow us to show you.

At the end of the 19th century, Comillas was chosen by the royal family as their holiday destination, and the city was decked out accordingly. In the space of a few years, the town was transformed with buildings by the modernist architects of Catalonia. Amongst these, special mention should be made of Antonio Gaudí, who designed a palace in neo-Arabic style, characterised by its spectacular contrast of colours. It is known as the «Capricho de Gaudí» (Gaudi’s whim) in Comillas. When you see it, you will be left in no doubt as to the town’s unique charm.

The main royal court building is Sobrellano Palace. It is in neo-Gothic style and is stunning from the outside. A visit is highly recommended, because the interior décor is partly the work of Gaudí himself. This is one of the most emblematic buildings in the whole region.

There are many things to see in the town of Comillas. Visit the huge Pontifical University building, soon to become the location of the International Centre for Higher Education in Spanish, aiming to become the international centre for the study of Spanish and Spanish-language teaching. You can also see the stately houses set around the main square and enjoy the many restaurants to be found throughout the town centre.

Comillas is a great destination at any time of the year. Its pantheons, the old hospital, Tres Caños Fountain and the cemetery’s guardian angel, especially beautiful from outside the walls at dusk, join Sobrellano Palace, Gaudi’s Capricho and the Pontifical University, to give the town an enviable historic-artistic centre. If you come in winter, then you will find this region greener than ever. If you come in summer, meanwhile, you will love the atmosphere in the streets and enjoy the stunning coastline, with Comillas Beach and Los Colodros Cove. Whenever you decide to come, you will discover one of the most important examples of modernist architecture anywhere in the Green Spain region. 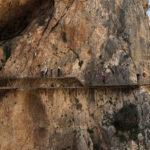 We use cookies to ensure that we give you the best experience on our website. If you continue to use this site we will assume that you are happy with it. If you need more information visit our Cookies policy.AcceptRead more